• Emergency aid for the improvement of the young refugees’ living conditions or deprived children’s, who arrive at the monastery;
• Aid in order to feed the monks (€1 a day feed & per monk);
• Helping the pupils of the medicine school, and the young monks in the form of sponsoring;
• Helping to improve the equipment of the monastery;
• Development aid for a health center, and of a medicine school;
• Helping to the construction of a double pedagogy school (traditional and westerner contents);
• Aid for the building of an end-of-lives house for lay people;
• And, at present: helping harvest donations which purposes are aiding the victims of the earthquake and to remedy the damage that underwent their houses.

In Project: improvement of sanitary installations, construction of a guesthouse, sponsoring of the monks (80 monks are less than 19 years old), establishing a school of Bonpo art and thangkas.

ACHIEVEMENTS THANKS TO YOUR DONATIONS

For the very young monks:
• their detached house has been renovated;
• their food can now be varied;
• we participate in the fact that qualified people take care of them.
For the school of medicine:
• its new equipment allows now its expansion;
• we continue to participate in it.
For the medical care: medicine, dietary complements, and the immediate needs are one of the top priorities. The health of certain monks requires intensive and various cares. Your financial donations will allow the qualified people at the monastery, to get medicines and dietary complements according to the immediate needs.
For Food: a new appropriate and reassured kitchen able to sustain the nourishment of 200 people. 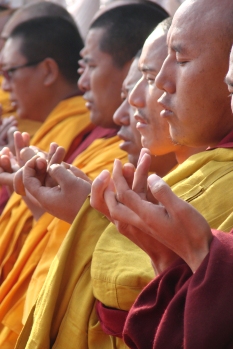 OTHER PROJECTS SUPPORTED BY THE TRITEN NORBUTSE ASSOCIATION
Construction of a school and of a boarding school in Siliguri, India, for 300 children, natives of Himalaya.   The instruction will be delivered under the shape of a double program with, on the one hand, an education centred on the bonpo culture and, on the other hand, modern and of quality instruction and an education. It is a question of guaranteeing to the children the best chances as for their social and occupational integration.   This project is a joint venture of the association Triten Norbutse, the Yungdrung Bon Stiftung association (Germany) and the N.G.O. Sherig Phuntsok Ling Bon Society (India).  The required funds amount to 180,072, €21. Any participation, whatever its amount, will thus be very estimated.

OTHER REACHED OBJECTIVES
The school of medicine had registered the urgent need for 3 machines intended for the manufacturing of pills :  A machine to crush plants, another one in order to mix them, brew them and incorporate them into a liquid and finally, a third one in order to make pills from this liquid (easier conditioning than with powders). The school had found a supplier of these big industrial machines in India. Photos and estimate were duly examined. Yet, included transport, they were rather expensive: €8000.
Project finalized in May 2013: We were capable of sending—thanks to your donations, this beginning of the year—, €3000 to the medicine school. It had already received half of the financing: €4000 on the behalf of a foreign sponsor. The estimate having been revised downwards (€7000 instead of the initial €8000), machines of more reduced capacity—but more corresponding to the projected budget—could be acquired. The school is very grateful to you for it.

THE NEW KITCHEN IS USED FROM NOW ON
On the occasion of our call in August and December 2011, we told you the urgency to build a kitcheN suited to the Triten Norbutse Institution. Indeed, so far, the complex contained no kitchen worthy of the name: cooking in the wood fire and dishes inside plastic tubs on the floor. The number of people living to Triten Norbutse increasing year by year, it is at present necessary to feed 200 people every day.
As expected after preliminary studies, an additional floor was built over one of the existing buildings, in order to accommodate the cooking there. From now on, the new kitchen is plainly functional.  It is equipped with the tap water and with the system of suitable main sewer, serving all the rooms dedicated to the spots of dishes, to the preparation and to the cooking. The new space possesses finally doors and windows which can be closed so any animal intrusion and any unhealthiness can be prevented.  Floors and walls of rooms dedicated to the dishes and to the preparation of the food were tiled, so the cleaning is eased.
The various parts of the new kitchen and the storage spaces can all be closed from now on, hence any infestation or contamination of utensils and food by the vector of animals such as insects, is now impossible. The new kitchen has rooms, and spaces specially designed for the arrangement. It’s equipped with a gas stove (less smoke than with wood-burning stoves); a wood-burning stove having, however, been preserved, in order to deal with—in particular, in cases of strikes—, the possible shortages of gas such as it occurs in the region of Kathmandu.  All the kitchen sinks of the new kitchen are connected with the system of the main sewer, what allows a sewage disposal in due form.
Finally, the working environment is secured.